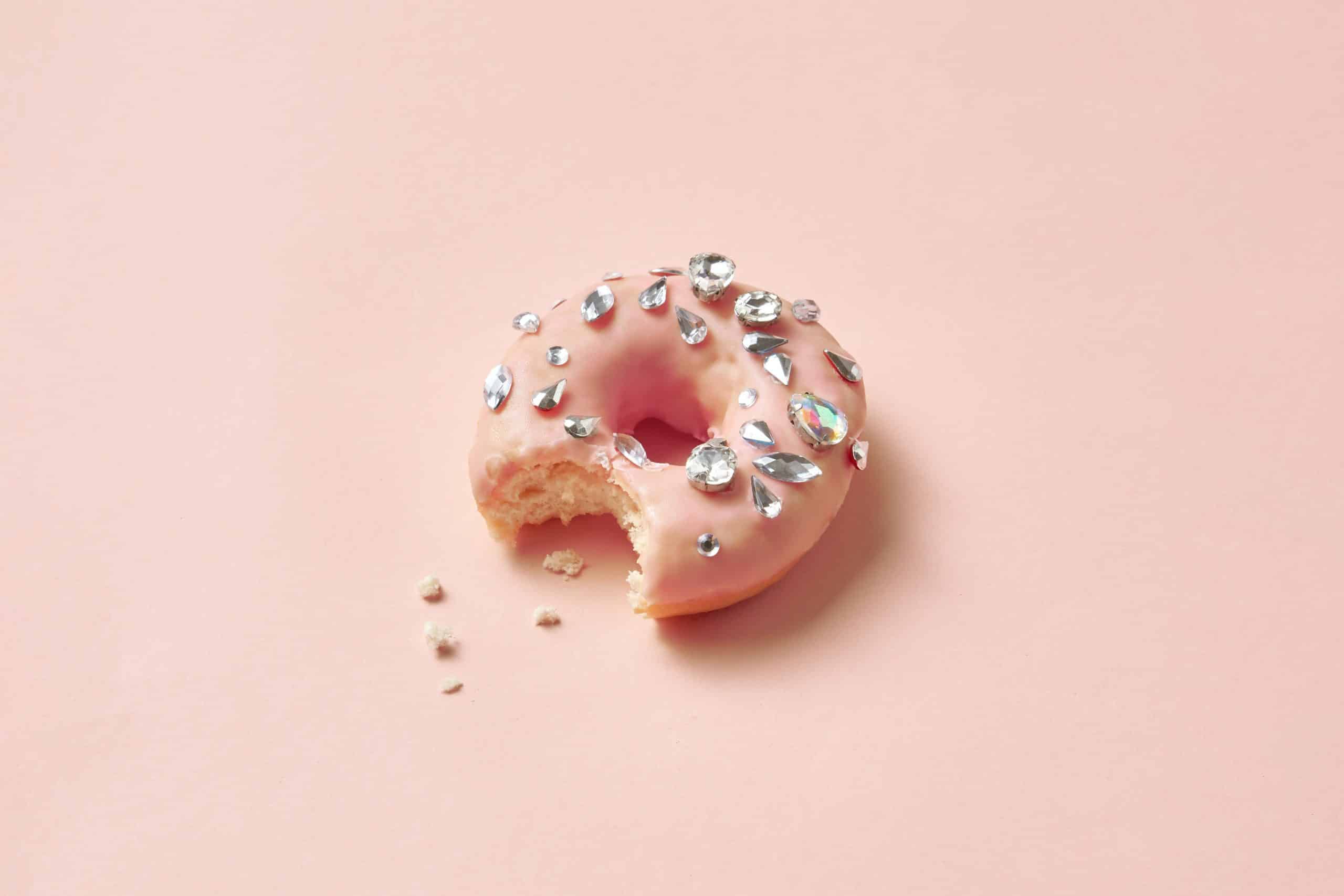 Over the past decade, lab-grown diamonds have been taking the jewellery industry by storm. Finally,...

Today we are off to Ecuador for wedding number 20 of our good friends Lisa and Alex from 2 People 1 Life. If you’re not aware of what Lisa and Alex have been up to I’ll explain in brief. Over the space of two years they are traveling round the world getting married in every country they visit, you can read more about their adventures HERE. 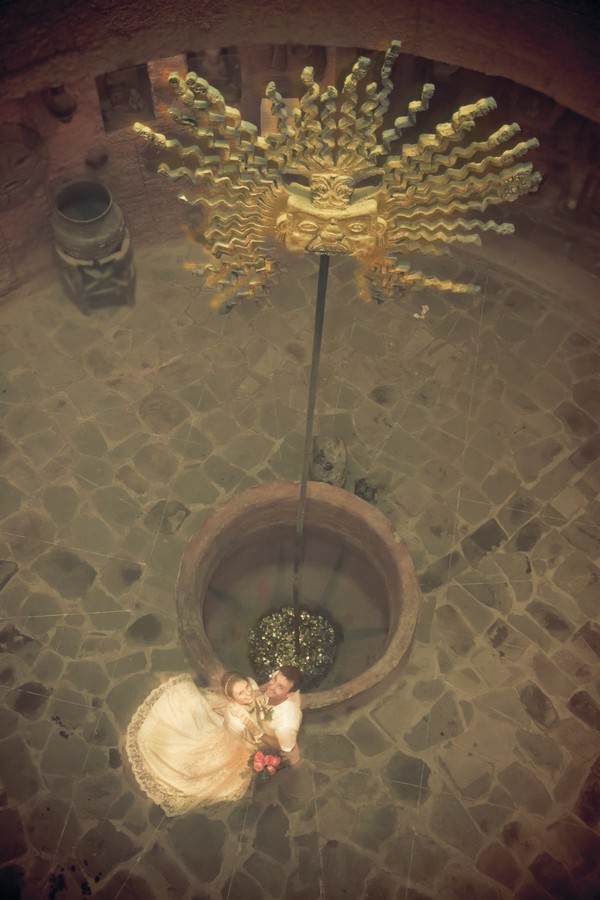 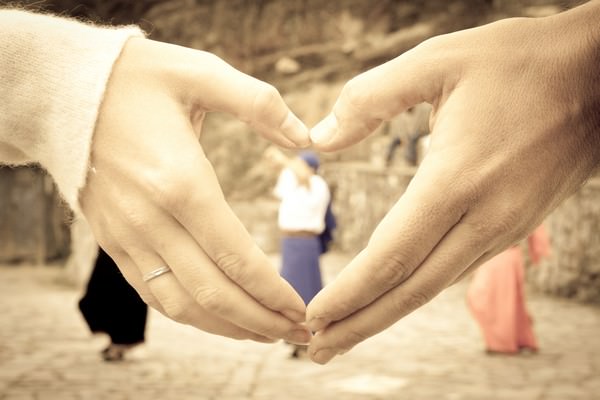 The wedding in Ecuador sees them with another very unique ceremony, where they take on the traditions of the country. They were also joined by Pablo Hidalgo a photographer based in Ecuador who documented the proceedings for us. 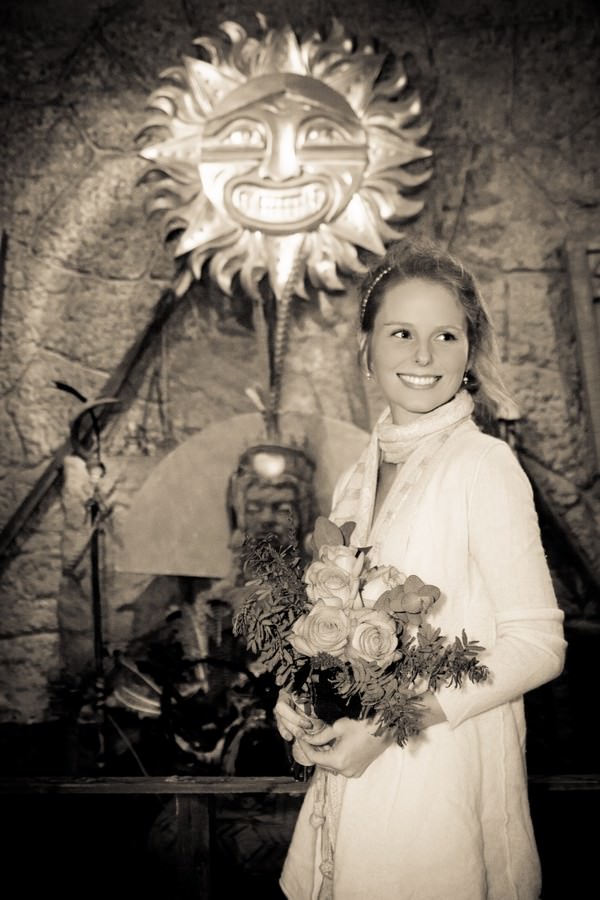 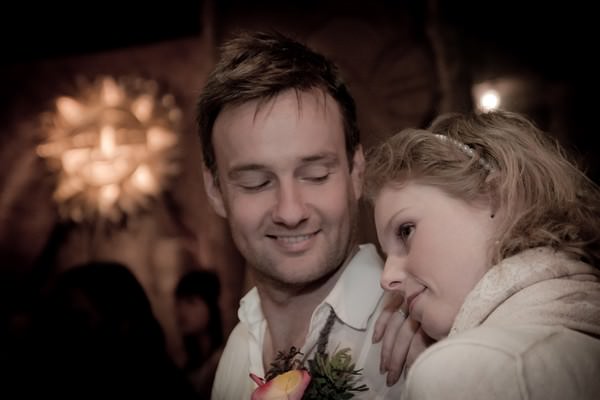 We awoke surprisingly refreshed the morning of the wedding and I was lucky to have Elizabeth to rescue my face for the wedding as she is a make up artist! Yay! We rushed around and tidied up Peggy our van, we grabbed a shower in the office and packed a bag and we were wedding ready when David came to collect us and we headed for the apartment to get ready for our 20th big day!
Having only been in Ecuador for a matter of hours we had not had much time to plan anything so we were extra lucky to have Elizabeth and David who had planned every single thing for us, they even got us traditional breakfast breads from the local bakery…every last thing was sorted. All we had to do was turn up…and thank goodness, we had JUST managed that bit!

Flowers – I made up my bouquet while Alex and Elizabeth got ready. I had cut some eucalyptus, lavender and a few stems from a lovely tree with a dark purple leaf from the office and Elizabeth gave me some of the most beautiful pink roses I have ever seen with huge heads and meter long stems, they were perfect.
Alex was dressed and ready to go and only a little bit late we all piled into the car to get to the wedding location…at the centre of the World. What a great unique and unusual place for a wedding ceremony! We were so excited! 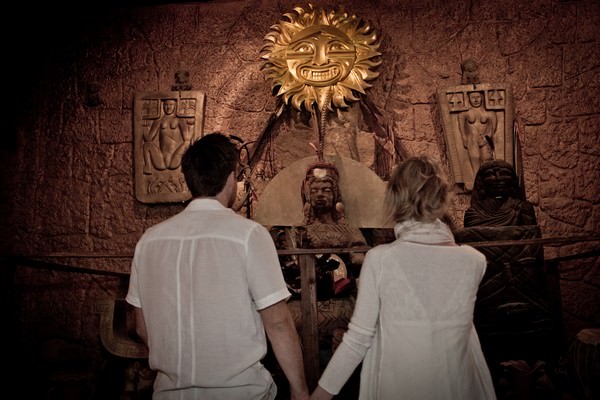 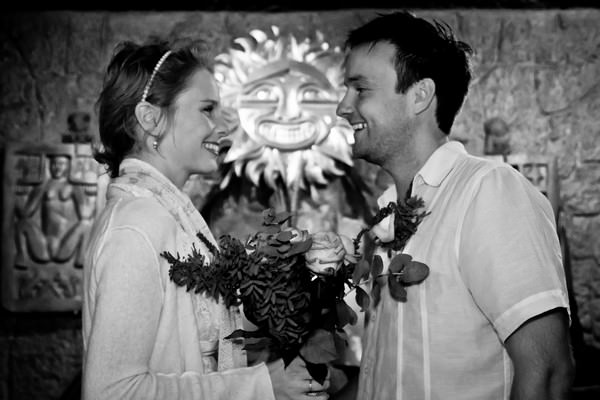 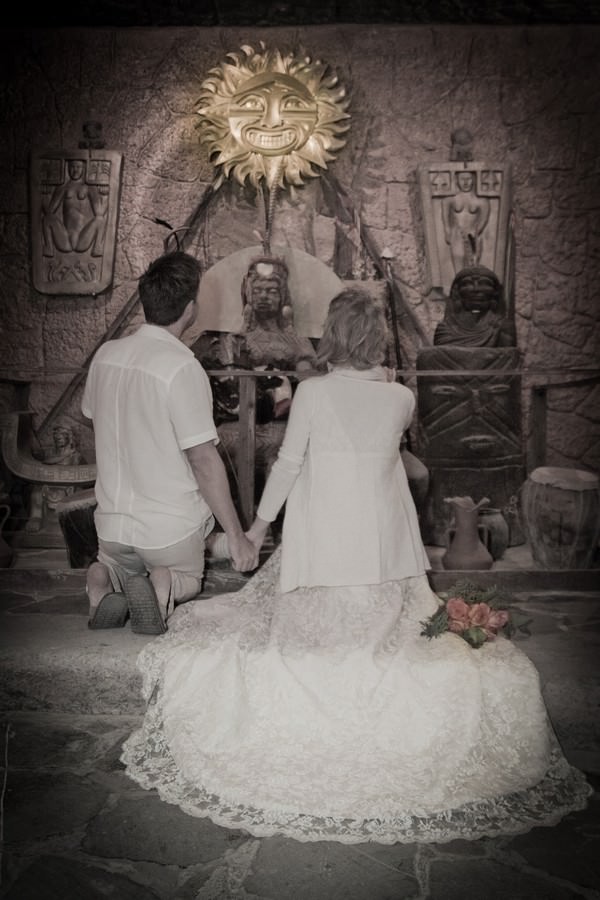 Once we all had our wedding outfits on we met with our lovely photographer for the day who had abandoned his Mums Mothers day dinner to spend a few hours with us, and then we met with Cristobal who would be holding the ceremony for us in the beautiful Templo del Sol which is a very spiritual place for many people. It is built on the Equator, the sun therefore is straight above the temple around noon.

While Cristobal prepared for the ceremony which would be incorporated into the temple tour on this very busy Mothering Sunday we had a look around. The temple is beautiful with a huge sun suspended just below the opening that lets in the sunlight in the domed roof. A dome in the floor reflects the ceiling and is filled with the blessings and wishes of hundreds of visitors to the temple.

As more and more people gathered in the temple we began to feel nervous which you would think by now is ridiculous. Maestro Cristobal came into the temple and there was almost a flowing aura around him. Everyone settled down and susshed each other as he took his place by the central ‘well’.
He started to speak in very fast Spanish and we were almost instantly lost but it didn’t mean we couldn’t understand what was going on. Cristobal explained to the people gathered what was happening and who we were and explained a little of his tribe the ‘Kichua’.

Once everyone had looked at us and decided that they were happy to be involved in our special day Cristobal began the ceremony. 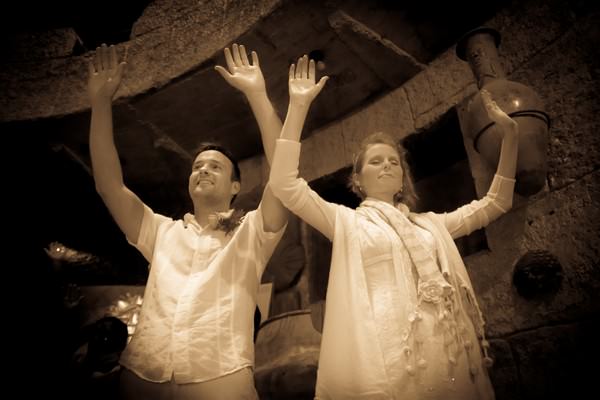 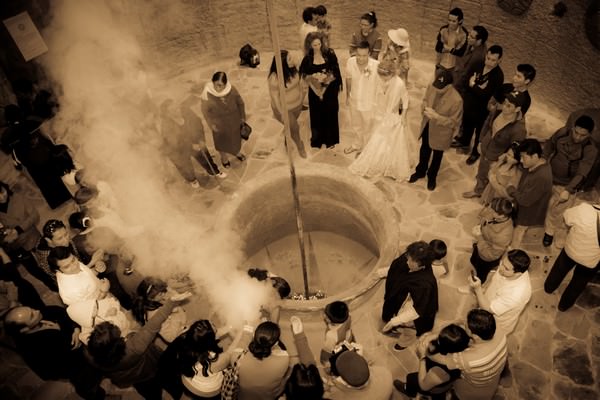 He welcomed us as “our sister and brother from far beyond the sea” and asked that everyone present help us to “celebrate this union forever”. He went on to say that  ”in true Kichua tradition the union is forever…not like in the rest of the world”

“Loyalty and faithfulness is a gift and you both MUST take it very deeply into both your body and soul. Until the creator and mother Earth decides to take you to a better life, enjoy every minute and cherish the best moments as they are short” 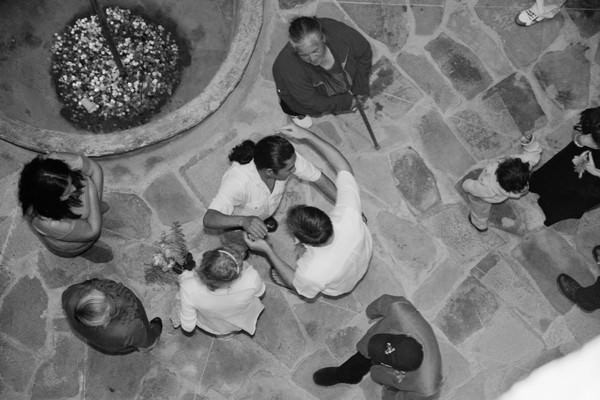 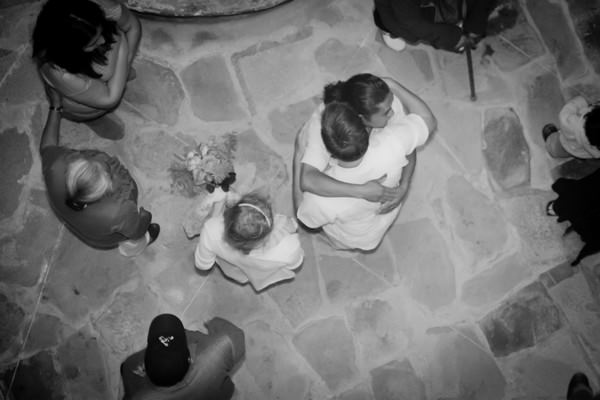 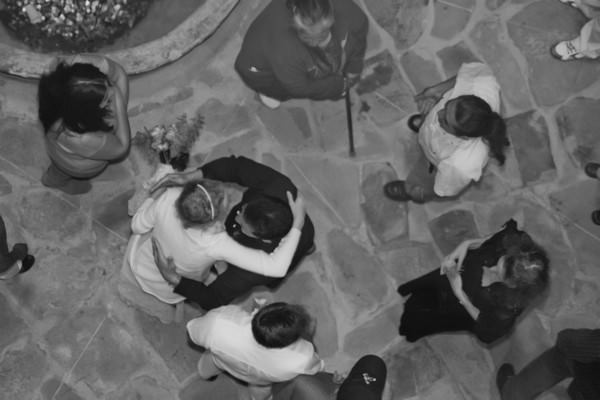 Cristobal asked everyone to take a penny and hold it in their hands. We followed everyone elses lead and closed our eyes and rubbed the penny in a circular motion with our palms for several minutes as Cristobal was deep in prayer. Once he had finished we all threw our pennies into the well, it was a great moment . Everyone was gathered around the well and Cristobal requested then a warm applause as he finished the blessing “for the beautiful beings that today we honoured with their presence our beautiful heritage and land”
As the applause died Cristobal lit a copal and walked the smoke around the well, the people all gathered close to the smoke and pulled it to their faces with their hands, closed their eyes and accepted the blessing. We followed suit as the smoke came around to us and as of that moment the two of us were married in the eyes of the Kicua tradition. 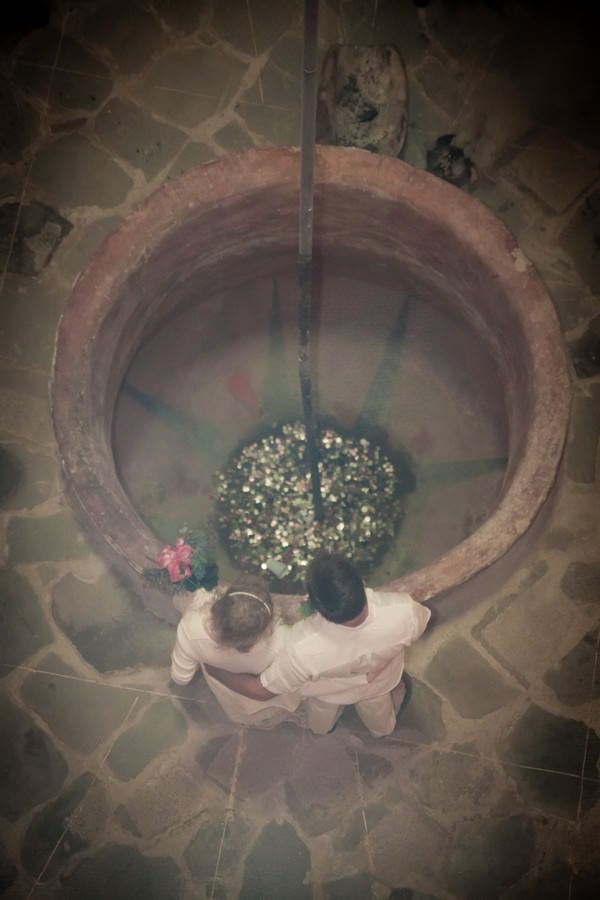 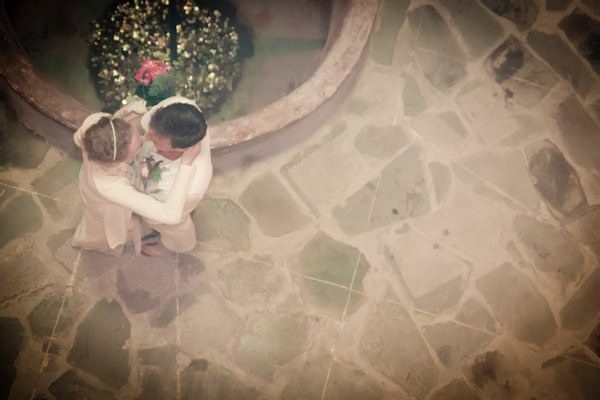 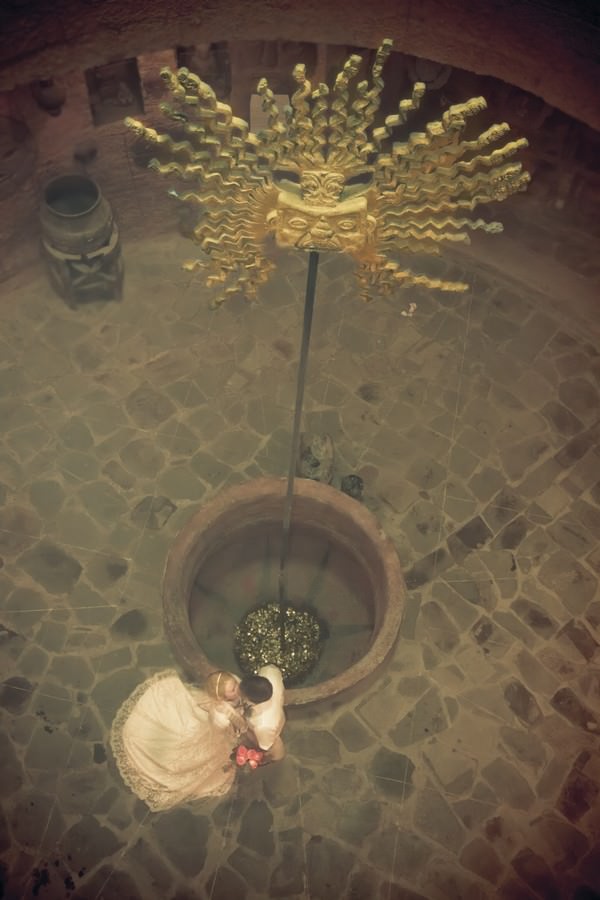 We went to take some pictures with Pablo and the dancers performing for the special day. They wore all white with bright multicoloured sashes and carried large coloured fronds as they danced. They were so thrilled to have us take part and asked for me to throw the bouquet once the dance was over. The lady who caught the roses hugged me a hundred times and thanked me just as many. Her partner also came to us and asked if he could take Alex’s button hole, I think they really wanted to get married and were excited as ‘they’ had caught the bouquet! 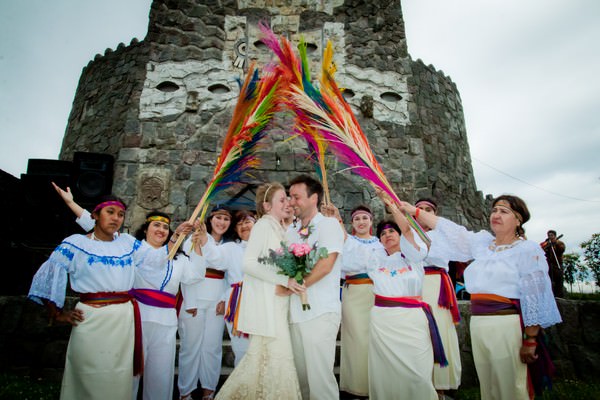 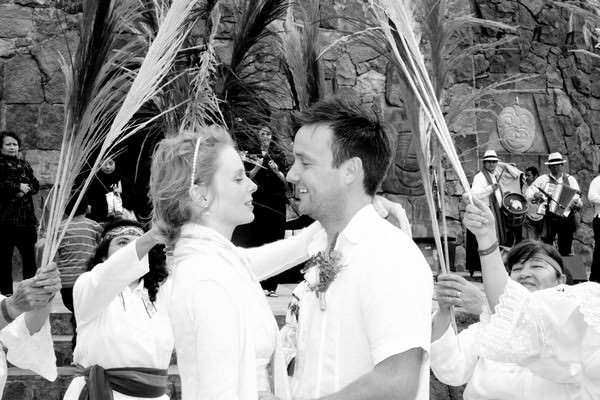 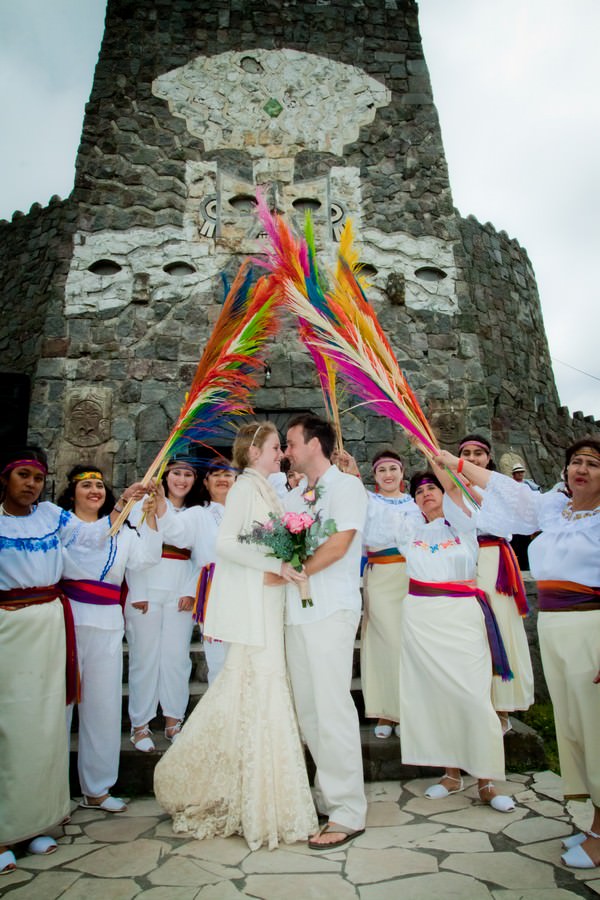 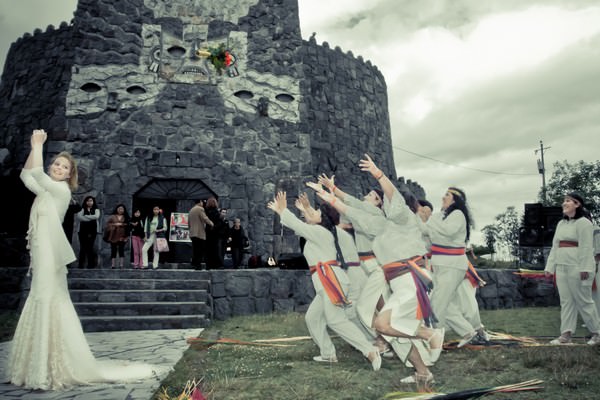 We had had such a great and emotional day that Alex and I were wiped out and once we had eaten we were no use to anyone and were certainly not great company so we packed up, thanked E, D and Alb and crawled into bed and went to sleep at 5 in the afternoon and didn’t wake up until 9am the next day! That HAS to be a sign of a fantastic day? 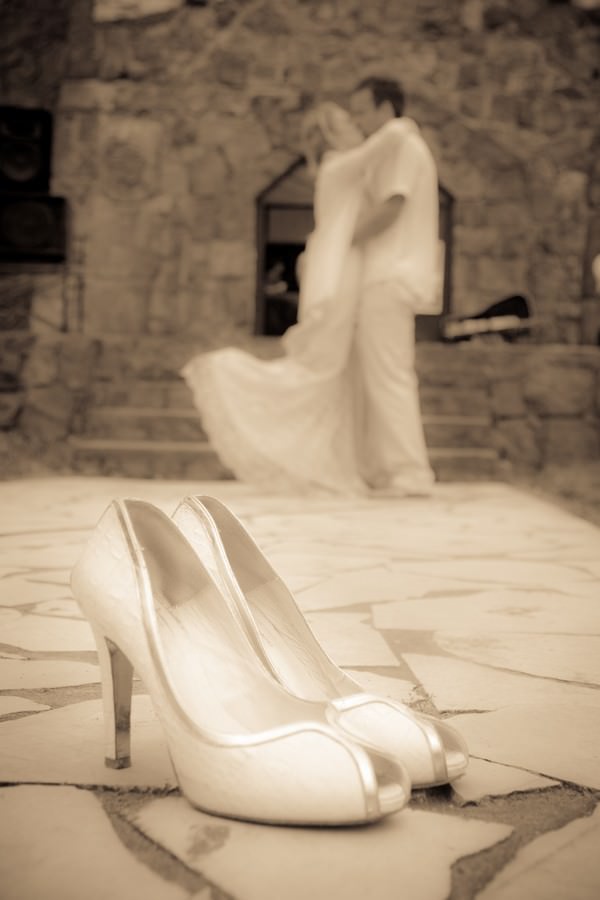 To follow Lisa and Alex’s journey go to – http://2people1life.com/blog/

♥  You can see more Destination Weddings on the Blog HERE  ♥